My first race of 2019 is in the books! BGR! (Black Girls RUN!) represented, as usual, but the NOC (Nocatee) was running the streets as well. My main BRF (best running friend) dragged me to a new half marathon PR, even though it was far slower than her PR. #goals 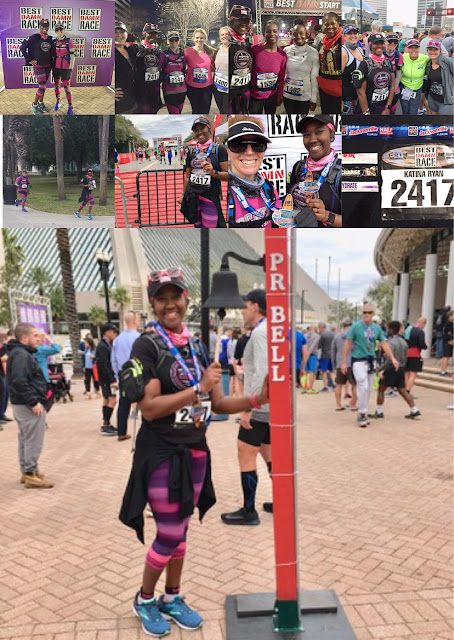 Posted by Proverbs 31 Marathon Mom at 7:37 PM No comments:

Another year, another Plunge; however this year, I wasn't the only one in my family going in. My six-year-old decided she wanted in on the action! She's usually quite timid and full of "I can't do that; that's too scary" statements, so when she expressed her interest in joining me, naturally, I was skeptical.

Boy, was I wrong! Not only did she wake up early on her own, but the slothful movement that typically plagued our mornings was absent, as she quickly donned her swimwear -- shoes included -- and climbed into the car. She chatted nervously the whole ride there, and I could tell that, no matter the outcome, this would be a day to remember.

We arrived a little over an hour and a half before the Plunge to secure "prime" parking across from the Seawalk Pavilion. We then purchased the annual WaveMasters Society Polar Plunge shirt and posed for the traditional pre-Plunge picture. 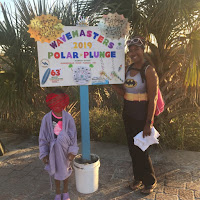 Although it was warmer than last year, it was still pretty chilly, so after we set our towels down, we did a calf deep trial to test the water. She was hooked and wanted to go in deeper, but I figured it was best we wait. If it was too cold, I was concerned she would not go in when it was time for the actual Plunge. We ran into several people we knew while we waited, so the time flew by quickly. 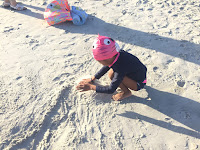 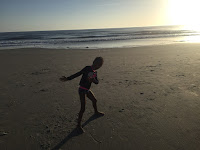 When it was Plunge time, we joined the crowd and walked closer to the water. I held her hand and explained our plan: first, the Lifeguards would sound an alarm. Then, the crowd would run into the water. I warned her that most people would be screaming, but it was okay, because they were having fun. I told her we would wait until some of the people started to come out before we ran in, because I didn't want her to get trampled. As I explained the process to her, I noticed a few people around us watched and listened too.

Then, it was go time! We held hands, ran towards the ocean, and once the water her about thigh-level, she started to scream and tried to climb me like a tree. I scooped her up and proceeded forward until I was waist-deep. She had calmed down by then, and I explained to her that we were going to wait for a wave and then submerge. They had done similar exercises in a pool during her Summer swim classes, so I knew she would comfortable with it.

When the perfect wave came, I began a short countdown, and *swoosh* we were done! I asked if she was ready to get out, and she replied with a resounding, "No!" We remained in the water for at least 5 more minutes before she opted to play in the sand just on the edge of the ocean, so she could still catch some waves if she wanted. 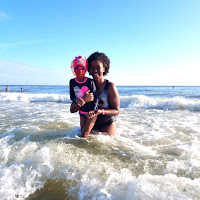 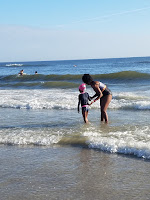 Needless to say, it was a very proud moment/day for me, and I look forward to future Plunges with her.

Proverbs 31 Marathon Mom
Welcome! You have just stumbled upon the ramblings of an orphaned 43 year old SAHM of 4 (including 1 fur baby and 1 quill baby). An avid runner, marathon mom, fitness buff, sprint triathlete, Noxgear Ambassador, and rider of "the bike that goes nowhere", my most challenging goal is becoming a Proverbs 31 Woman and "Wife After God"