I have been participating in this race since 2010, but I never truly "got it." I mean, my mother was a cancer survivor, but I seemed to have repressed the memory of her battle, probably because there were so many other things happening at the same time (my parents divorce, my father's remarriage, and the loss of our home during Hurricane Andrew to name a few). I saw survivors at the races and heard stories of those we'd lost, but, for some strange reason, it never truly resonated with me until now.

2016 has by far been the most difficult year of my life. In the past 3 months, I lost both of my parents, and cancer played a role in their deaths. In honor of the DONNA's 10th Anniversary and in memory of family and friends lost, I am asking for $10 donations to help The Donna Foundation support families as we work to FINISH this disease. I am also taking part in the Inaugural Booby Trap Challenge. Let's make 2017 our best year yet!

The Booby Trap Challenge is the DONNA 10K, 5K and either the Full or Half Marathon

Yes, I am channeling Britney Spears (I even pulled up the YouTube video to reminisce), but it's the perfect way to describe my little late night race registration relapse. You know how you hear about a race, pull it up on your browser, realize it's not in your budget, yet keep the window open for days weeks until you either find a discount code, approach the price increase deadline, or simply run out of rational reasons why you shouldn't register? Oh, that's never happened to you? Weird . . .

Anyway, the newest addition to my 2016 race calendar is the Psych Ed Connections Turkey Trot 5K/10K. Cons: I haven't decided which distance I'm running -- it's just three days before Space Coast -- and it's their inaugural race, so I'm not sure what to expect. Pros: It's close to home, it beats driving to Mandarin for the Thanksgiving Classic (although I have not run that race since I started the Big Bang Series in 2013, I still got up early and cheered my friends on), partial proceeds benefit Youth Crisis Center, and there is a parade after the races. Sounds like a winner, eh? 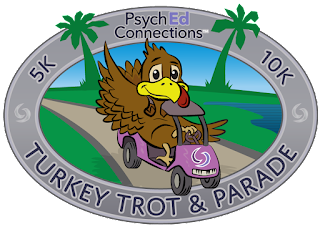 Posted by Proverbs 31 Marathon Mom at 9:27 PM No comments:

Well, today, ladies and gentlemen, registration is open, and :say it with me now: it's time, once again, for the 26.2 with Donna National Breast Cancer Marathon! In 2017 they will be celebrating their 10th anniversary, so we're in for a real treat. In addition to their usual Family Fun Run, 5K, Relay, Half, Full and 110 Ultra Marathons, they have added an Anniversary 10K and, what I suspect will be my new personal favorite, The Booby Trap Challenge (10K, 5K and either the half or full marathon)!

Proverbs 31 Marathon Mom
Welcome! You have just stumbled upon the ramblings of an orphaned 41 year old SAHM of 3 (including 1 quill baby). An avid runner, marathon mom, fitness buff, sprint triathlete, Noxgear Ambassador, AdvoCare Distributer, and Camp Gladiator camper, my most challenging goal is becoming a Proverbs 31 Woman and "Wife After God"

What's Next on Your Calendar?